Arkham, Massachusetts and the Lovecraft Mythos. 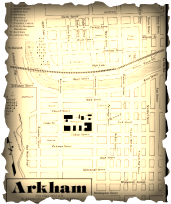 Arkham is a fictional city in Massachusetts, part of the Lovecraft Country setting created by H. P. Lovecraft and is featured in many of his stories, as well as those of other Cthulhu Mythos writers.

Arkham House, a publishing company started by two of Lovecraft's correspondents, August Derleth and Donald Wandrei, takes its name from this city as a tribute. 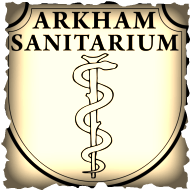 In the 1933 story The Thing on the Doorstep, Lovecraft described

the ancient, mouldering, and subtly fearsome town...witch-cursed, legend-haunted Arkham, whose huddled, sagging gambrel roofs and crumbling Georgian balustrades brood out over the centuries beside the darkly muttering Miskatonic. Arkham is the home of Miskatonic University, which figures prominently in many of Lovecraft's works. The institution finances the expeditions in both At the Mountains of Madness (1936) and The Shadow Out of Time (1936). Walter Gilman, of The Dreams in the Witch House (1933), attends classes at the university. Other notable institutions in Arkham are the Arkham Historical Society and the Arkham Sanitarium. 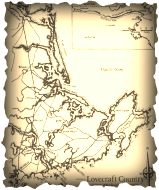 The precise location of Arkham is unknown, although it is probably near both Innsmouth and Dunwich. However, it may be surmised from Lovecraft's stories that it is some distance to the north of Boston, probably in Essex County, Massachusetts. The real-life model for Arkham seems to be, in fact, Salem, its reputation for the occult making it appealing to one who dabbles in the weird tale.

Arkham’s most notable characteristics are its gambrel roofs and the dark legends surrounding the city for centuries. Occurrences such as the disappearance of children (presumably murdered in ritual sacrifices) at May Eve and other bad doings are accepted as a part of life for the poorer citizens of the city.

The Elizabeth Arkham Asylum for the Criminally Insane, commonly referred to simply as Arkham Asylum, is a fictional psychiatric hospital in the DC Comics Universe, usually appearing in stories featuring Batman. Many psychopathic criminals from across the DC Universe, mostly from Batman's own rogues gallery (such as the Joker, Poison Ivy, the Riddler, Two-Face, the Scarecrow, Killer Croc, Black Mask, and Harley Quinn) have been imprisoned within the Asylum and also escaped from it. The Arkham Asylum is named after the fictional city of Arkham, Massachusetts, found in many of H.P. Lovecraft's short horror and science fiction stories, such as "The Colour Out of Space". 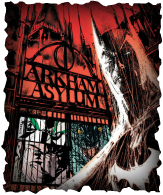 Arkham Asylum is located on the outskirts of Gotham City and is where those of Batman's foes considered to be legally insane are incarcerated (other foes are incarcerated at Blackgate Penitentiary). Although it has had numerous administrators, recent comic books have featured Jeremiah Arkham. Inspired by the works of H. P. Lovecraft, and in particular his fictional city of Arkham, Massachusetts,the asylum was created by Dennis O'Neil and first appeared in Batman #258 (October 1974); much of its back-story was created by Len Wein during the 1980s.

Arkham Asylum does not have a good record, at least with regard to the high profile cases (most notably the Joker who is frequently shown escaping at will); and those who are 'cured' and released tend to re-offend. Furthermore, several staff members, including directors Dr. Amadeus Arkham (Founder) and Dr. Jeremiah Arkham, as well as staff members Dr. Harleen Quinzel, Lyle Bolton and, in some incarnations, Drs. Jonathan Crane and Hugo Strange, have committed serious crimes.

In addition, prisoners with unusual medical conditions that prevent them from staying in a regular prison are housed there. For example, Mr. Freeze is not always depicted as insane, but he requires a strongly refrigerated environment to stay alive; Arkham, with special conditions required for certain patients or inmates being a regularity rather than exception, is potentially seen by authorities to be an ideal location under certain circumstances.

Gotham criminals deemed "criminally insane" or "mentally unfit" by the court of law generally are treated at Williams Medical Center before being deemed dangerous enough to be sent to Arkham Asylum. 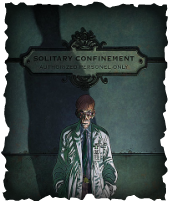 Just outside Gotham City, Arkham Asylum has a long and brutal history, beginning when its own architect went mad, hacking his workers to death with an axe. He was convicted and sentenced to spend the rest of his life in the same dark halls that had sent him over the brink.The one-shot graphic novel Arkham Asylum: A Serious House on Serious Earth establishes that the asylum was named after Elizabeth Arkham, the mother of founder Amadeus Arkham. The original name of the asylum was "Arkham Hospital." Its dark history began in the early 1900s when Arkham's mother, having suffered from mental illness most of her life, committed suicide (however, it was later revealed that her son actually euthanized her, and repressed the memory). Then, Amadeus Arkham decided, as the sole heir to the Arkham estate, to remodel his family home in order to properly treat the mentally ill, so others might not suffer the fate that his mother did. Prior to the period of the hospital's remodeling, Amadeus Arkham treated patients at the State Psychiatric Hospital in Metropolis, where he, his wife, Constance, and his daughter, Harriet, had been living for quite some time. Upon telling his family of his plans, they moved back to his family home to oversee the remodeling. While there, Amadeus Arkham received a call from the police notifying him that Mad Dog, a serial killer, referred to Amadeus Arkham by Metropolis Penitentiary while at State Psychiatric Hospital, had escaped from prison, and sought his considered opinion on the murderer's state of mind. Shortly afterward, Amadeus Arkham returned to his home to find his front door wide open. Inside, he discovered the corpses of his wife and daughter in an upstairs room, with Mad Dog's alias carved on Harriet's body. Despite this family tragedy, the Elizabeth Arkham Asylum For The Criminally Insane officially opened that November. One of its first patients was Mad Dog, whom Amadeus Arkham insisted on personally treating. After treating Mad Dog for six months, Amadeus Arkham strapped him to an electroshock couch then deliberately and purposefully electrocuted him. The death was treated as an accident but contributed to Amadeus Arkham's gradual descent into madness, which he began to believe was his birthright. Eventually, Amadeus Arkham was incarcerated in his own asylum, where he died. 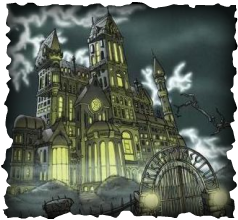 Arkham Asylum first appeared in 1974, in Batman #258 by Dennis O'Neil. In this story, it is named as "Arkham Hospital" (although it is not clear what kind of hospital it is); "Arkham Asylum" first appeared in another O'Neil story the following year, but it was not until 1979 that "Arkham Asylum" completely replaced "Arkham Hospital" (and the occasional "Arkham Sanitarium") as the institution's name. By 1979, too, the move to have the asylum closer to Gotham had begun; that was completed in 1980, when Batman #326 by Len Wein described the asylum's location "deep in the suburbs of Gotham City" (perhaps for this reason Batman #326 is listed in some histories as the first appearance of Arkham Asylum). It was also Wein who, in 1985's Who's Who #1, created its current backstory.

Arkham Asylum has been demolished or destroyed several times in its history, notably during the events of Batman: The Last Arkham (see below). It is also seriously damaged at the beginning of the Knightfall storyline, when Bane uses stolen munitions to blow up the facility and release all the inmates. After these events, the asylum is relocated to a large mansion known as "Mercey Mansion". At the beginning of the No Man's Land storyline, the asylum is closed down and all its inmates set free (a timer is used to open the doors two minutes before the city is sealed). This is orchestrated by the administrator himself, who had the choice of releasing the inmates or watching them all starve or kill each other. In the middle of the story, it is revealed that Batman has established a hidden base within the sub-basement of the asylum during the Prodigal storyline known as "Northwest Batcave."

During the No Man's Land storyline, the Joker and Harley Quinn take over Arkham. With the sole exception of the Riddler, the inmates elect to remain in the cut-off Gotham City.

After Batman's disappearance due to the events of Batman R.I.P.and Final Crisis, Black Mask frees the inmates from Arkham as they are being transferred at the start of Battle for the Cowl. He declares himself their new leader, proving his power by blowing up the asylum.

In the Battle for the Cowl one-shot, Dr. Arkham wanders among the remains of the asylum as he muses on his life. He reveals that he has discovered blueprints created by his ancestor, the first Dr. Arkham, for a new Arkham Asylum. He also contemplates the fates of his own nonviolent, "special" patients: an artist with almost no facial features who must paint facial expressions onto his almost blank face to express himself; a man obsessed with his own reflection in a series of mirrors in his room; and a woman supposedly so ugly, one glance at her face would drive anyone insane. Upon discovering his "special" patients (unharmed from the destruction thanks to their secluded cells), Arkham resolves to rebuild the facility according to his ancestor's vision, but to serve as a literal asylum for mentally ill patients in order to shelter them from the outside world. However, when told to be happy with the new development, the artist secretly paints his face white with a hideous grin, reminiscent of the Joker; it is implied that the "special" inmates, as well as Arkham himself, have given in to madness.

In the Arkham Reborn mini-series, Arkham Asylum is rebuilt and financed by Dr. Arkham.But in Batman #697, Dr. Arkham is revealed to be the new Black Mask and is imprisoned in his own asylum. It was also revealed during Arkham Reborn, that as both Dr. Arkham and Black Mask, he had begun to manipulate patients, a plotline that culminated in Detective Comics with Alyce Sinner becoming the new head of the facility, but secretly working with Arkham/Black Mask. It was also revealed that the "special" patients were figments of Arkham's imagination. 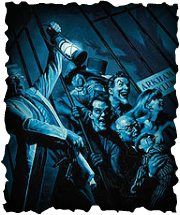 Originally, Arkham Asylum is used only to house genuinely insane patients having no connection to Batman, but over the course of the 1980s a trend was established of having the majority of Batman's supervillain opponents end up at Arkham. Nearly all of Batman's enemies have spent some time in Arkham.

Other DC Universe publications that feature Arkham Asylum and its inmates include Alan Moore's Swamp Thing (wherein Jason Woodrue aka The Floronic Man is detained) and The Sandman by Neil Gaiman, wherein Doctor Destiny escapes to wreak havoc on both the real and dream worlds.

Arkham has also been featured in varying capacities in a number of high profile DC miniseries events, such as Identity Crisis, Day of Vengeance, Countdown, and Crisis on Infinite Earths among others.